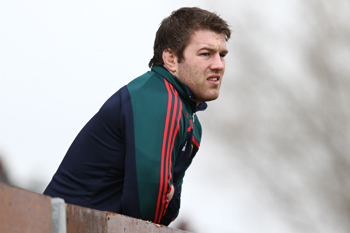 We often forget an injured player.

Had to feel sorry for Sean O’Brien when I spotted him at a GAA league match in March. Sean had probably been Ireland’s most consistent rugby player in recent years but a dislocated shoulder playing for Leinster in a December RadoDirect Pro12 game ruined his season. He couldn’t play a part for Ireland in the 2014 RBS 6 Nations Championship. Ireland went on to top the table and Sean had to watch on TV as his teammates beat France in Paris on a memorable day for Irish sport.

The photo of Sean at the Carlow v Wicklow League match in Dr. Cullen Park was taken at the same time the Irish team (he should have been playing with) was making a triumphant return to Dublin Airport. Carlow were also well beaten that day. The agony of injury.