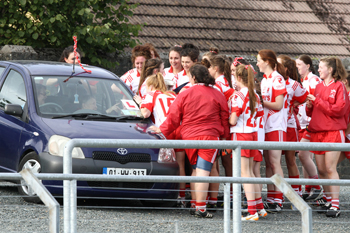 Most teams accept a cup after a final, pose for the team photo, get a few photos taken with family/friends and head straight back to the dressing-room.

Tinahely were victorious in the Wicklow Ladies Senior Football Final at Aughrim in 2013. They collected the cup and then surprisingly all the Tinahely players and subs just raced off the pitch and out the gate. Nobody was sure what was happening until they saw the team up on the terrace surrounding a car.

92 year old ‘Granny Mulhall’ is an honorary member of the Tinahely Ladies team and is locally famous for making holy medals and praying for the team before matches. She had never seen the team playing before and her first match was viewed from a car up on the terrace. The team gave her the honour of being the first Tinahely fan to get her hands on the cup.