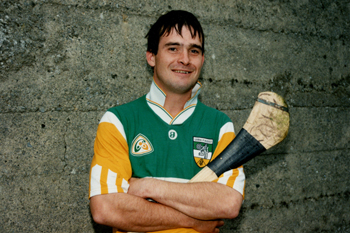 Johnny Pilkington is a friend of mine from way back in my college days. I was also very privileged that he was my ticket source for the Offaly hurling glory years in the 1990s. It all started when I went to one of his Leinster Championship matches after we finished college to educate a Wicklowman about hurling. It was a rollercoaster for the next few years with the highs of All-Ireland wins, the madness of 1998 and also the lows like the 1995 final loss when he was captain. Johnny always reminded me that the tickets were for the camera and not for me!

He was elusive enough for photos in college but I got a few more as the years went by. This one from 1998 captures his mischievous grin. I’m surprised there hasn’t been a book on him to date with all the legendary stories, rumours and quotes over the years. Most of them of course have been wildly exaggerated and completely untrue but that’s what adds to a great character…

Irish Times article on Johnny Pilkington was published on September 11th 2008 before the 1998 All-Ireland Final.

Dermot Crowe’s article on Johnny was published in the Irish Independent on June 17th 2001.

Who fears to speak of ’98?
A radio documentary that relives a dramatic year in the life of Irish Hurling, where the summers’ games became our national soap opera.