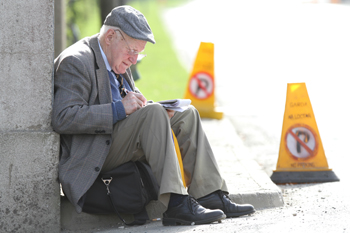 I took this photo back in April 2011 after a Wicklow NFL match in Aughrim.  Peter Keogh was waiting to be collected on the road outside the main gates. He obviously decided that standing up waiting was wasted time and sat down on his bag to start work on his match report. I spotted him sitting in the corner of my eye in a ‘No Parking’ zone.

Peter is a legend in Wicklow GAA. The article below also really gives you a vivid picture of his passion and energy for GAA.

Daragh Ó Conchúir‘s article on Peter Keogh was published in the Irish Examiner on June 13th 2015.

“They always say here, the best place to find me is somewhere near the teapot.”

The Legend of Peter Keogh